This site was designed for the latest version of Chrome, Firefox, Safari, and Internet Explorer (version 10+). Some features may not work correctly in your browser. OK


Chevrolet has been around since the early days of the automotive industry. The automaker’s drive to create new vehicles geared to the average consumer has made it one of the most popular brands in the industry. Affordable, high-quality vehicles are synonymous with the Chevrolet legacy.

Founded in 1911, the Chevrolet Motor Company released the Classic Six as its first production vehicle. The brand’s first model failed to turn a profit thanks to fierce competition from other American automakers. In 1917, founders William Durant and Louis Chevrolet joined the General Motors family.

Just six years after joining General Motors, Chevrolet sold its millionth vehicle. The brand’s knack for innovation made it popular among the average consumer. Competitors, on the other hand, kept their offerings stagnant throughout the first few decades of the 1900s.

The Great Depression hit automakers hard, but Chevrolet was one of the few manufacturers to adjust their marketing and offerings. The Chevrolet Sport Roadster, for example, featured “The Great American Value” tagline.

The 1936 Chevrolet Suburban introduced the world to what would become the world’s longest continuous production nameplate. Still in production today, the Suburban offers families a spacious interior with top technologies.

Chevrolet committed to World War II by ceasing production of civilian vehicles. It wasn’t until 1946 that the American automaker returned to producing vehicles for retail consumers.

The first Chevrolet Corvette hit roadways in 1953. The model sold just 300 units in its introductory year. Two years later, in 1955, Chevrolet brought the V8 engine to the road, driving innovation once more.

The Chevrolet Impala dominated the 1960s and quickly became an American icon. Over the next few decades, the American automaker continued to introduce new vehicles designed to appeal to customers. 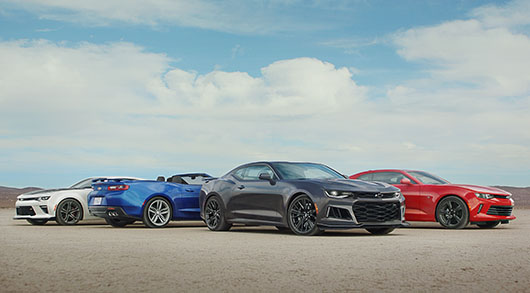 We'd Love To Hear From You!